Traditionally, people in outer Nordfjord made a living as fishermen and farmers  – hence the term «Fish Farmer» which describes the activity in pre-industrial coastal Norway. 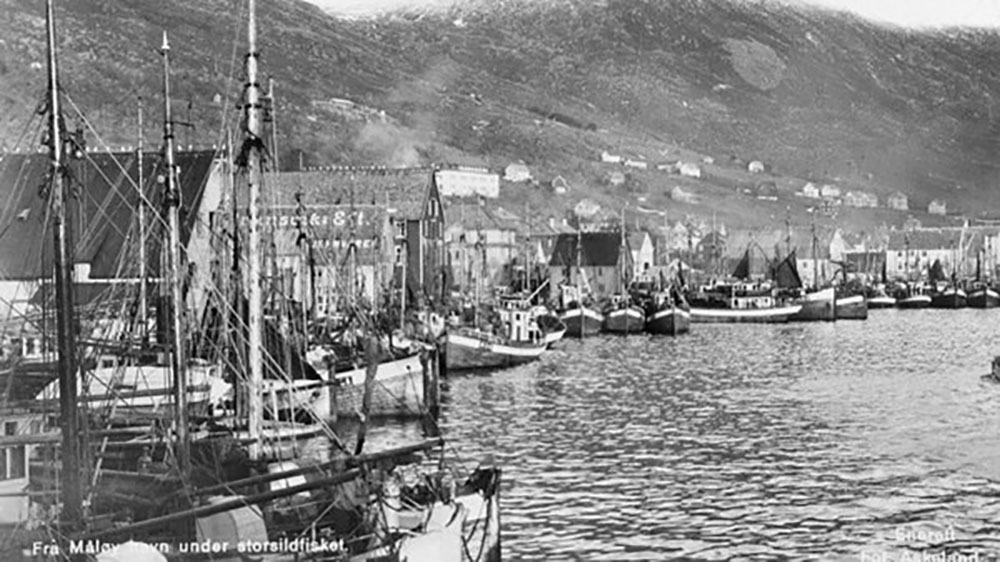 Towards the end of the 1940’s «the great herring adventure» happened which was of great importance for Måløy as a fishing port. During these years, which lasted until approx. 1960, it is estimated that the population in Vågsøy was doubled in the most hectic periods. It was said that you could walk with dry feet across Ulvesundet due to the number of boats. It was bustling with activity and in this period many factories and freezing plants were built for taking care of the fish in addition to the traditional salting of fish, where the barrel factory in Hagevik in Ulvesundet had an important function as the supplier of barrels for this purpose.

In 1958 the winter herring failed and this became the beginning of the end to the herring adventure. When the large herring failed there was raw material for the herring oil industry which had been established in Måløy from the herring fishery on Iceland, and from the mid-60’s from the ring net fishery of herring and mackerel in the North Sea. In that time the ring net boats were equipped with a new type of pull-in winch that was called a power block. This equipment installed on relatively small boats resulted in several capsizes and losses of boats from i.a.Vågsøy.

The new fishery that turned out to be significant after the herring, was the fishing of greyfish. This had been carried on since the 1920’s from Måløy, but from 1960 greyfish was fished from more distant waters, seasonally in Skagerak and the Oslo Fjord, but from the middle of the 1960’s primarily around the Shetlands and the Orkney Islands, the Hebrides and Rock All. The main market for greyfish was the United Kingdom for the fish & chips market.

Greyfish skinning provided seasonal work for several hundred people from the entire outer Nordfjord and created a lot of activity in Måløy. This work was often combined with farming.

There was even a Norwegian National Championship in the skinning of greyfish with a Norwegian record set by Kjell Elde from Måløy who skinned 100 fish in 18 minutes and 27 seconds!

During this period many advanced freezing plants were built in Måløy, in order to be able to ship the fish in a frozen condition to the markets.

Photo: Fylkesarkivet i Sogn og Fjordane
When the fishing of greyfish slowed in the 1970’s and the fishing of herring and mackerel in the North Sea took over, these freezer plants became Måløy’s greatest competitive advantage in relation to being able to offer an amazing freezer quality for the mackerel that was shipped to Japan, which constituted a large market. At the same time the dried cod period began in Måløy, which also had facilities for this industry which supplied especially Southern Europe with salted fish.

In the 1980’s the golden era of the salmon industry started, which still to this day is an extremely important resource, not just for the coast of Norway but for the country as a whole.

A lot of the fish that arrive in Måløy are pelagic species (blue whiting, greater argentine, capelin and mackerel), both for fishmeal and the feed industry, but also for consumption.

In addition there are two factories that receive pelagic fish for consumer production:

Pelagia Måløy is one of the most modern and efficient factories in the industry today and has a production capacity of 1,100 tonnes per day, as well as a filleting capacity of 16 tonnes per hour.

Maaløy Seafood receives herring and mackerel for deep-freezing and has the capacity to package and freeze approx.280 tonnes per day. The production capacity for packing is 400 tonnes/day. The also have 8 filleting lines for the production of high-quality flaps.

In addition there is the freezer terminal, the Måløy terminal for receiving frozen fish from the fleet of trawlers and liners that freeze the fish on board.

Raudeberg, north in Vågsøy, is where Snorre Seafood is located with its newly renovated state-of-the-art facility of 2,500 m2 which receives approx.1,000 million tonnes of fish every year from the local coastal fleet. The fish is processed in lines for both hand and machine filleting and is packaged for both domestic and international markets. Snorre Seafood also has a modern smoke house where they produce according to old recipes for the highest quality. Dried cod is also produced by Snorre Seafood.

The history of fishery of the outer Nordfjord and in particular Måløy has thus been continued and the fish which has always been an important resource for people along the coast of Norway is still today a prominent and important industry.